Torreserena Village is in Apulia, on the Ionian coast, in an area rich of landscapes all to be discovered. Just 50 Km away: Matera, the "City of Stones", a Unesco World Heritage Site and European Capital of Culture 2019; Grottaglie, with a very rich tradition of ceramics; Gravine di Ginosa; the beautiful white towns of Itria Valley, including Martina Franca, Locorotondo and Alberobello, also a UNESCO World Heritage Site. About an hour's drive away, in the heart of Salento, you can visit Lecce, with its very rich Baroque architecture. 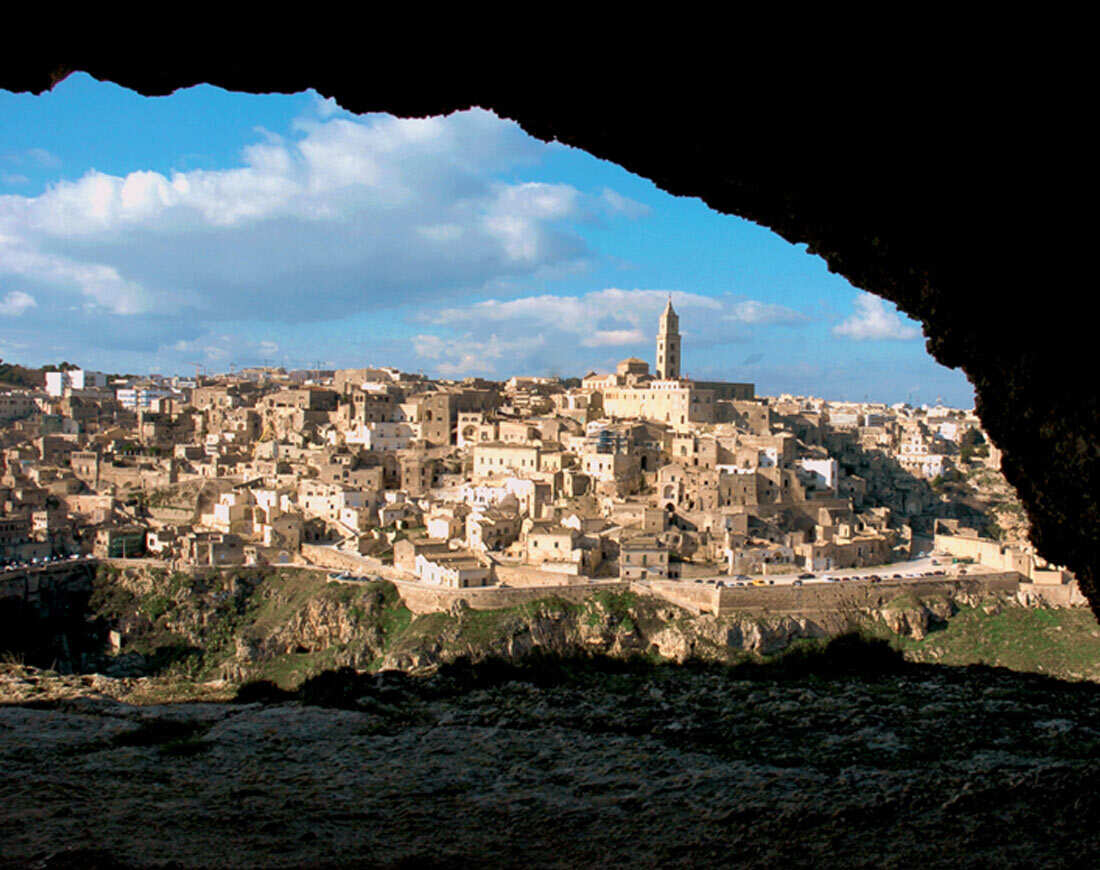 Known as the city of the two seas and the swing bridge, Taranto, with its historic center, houses medieval buildings of considerable architectural value. The different districts of the city deserve to be visited, recalling the ancient monuments of a Hellenic civilization that was its own and which resurfaces in the testimonies of the archaeological finds preserved at the National Museum of Taranto.

Matera, "City of Sassi", has been placed under the protection of Unesco and is included in the list of "World Heritage Sites". Some great masters of cinema have set their films in this evocative environment, which due to its peculiarities was the first site in the world declared a "cultural landscape" by UNESCO. The city has developed in a suggestive environment, made of steep rocks overlooking a deep ravine, where Gravina stream flows.

Splendid city of the province of Taranto, Grottaglie preserves large buildings of inestimable value: the Convent of S. Francesco di Paola, which represents the most important Baroque monument, with a splendid cloister inside, the Church of Carmine where a Nativity scene is located in Pietra di Stefano da Putignano from 1530. In the upper part of the city stands the 13th century Episcopio Castle, where the Ceramics Museum and the various exhibitions and events dedicated to art are located. Adjacent to the Castle there is the ancient district.

Lying on one of the last southern hills of the South-Eastern Murgia, its height dominates the entire and enchanting Valle d'Itria. In addition to a rich landscape dotted with the famous trulli and the typical buildings of the "masserie", Martina Franca enjoys a vast karst area of undisputed beauty of particular naturalistic value. To be visited the historic center with Palazzo Ducale, home of the Festival of the Itria Valley, which in the summer involves artists and visitors from all over the world, the Cathedral of San Martino and the Carmine church.

In the Itria Valley to be visited the splendid Locorotondo, famous for being called for years one of the "most beautiful villages in Italy". Of particular interest is the historic center, which is striking for its graceful and intimate ensemble, with its characteristic houses with unusual pointed roofs called “cummerse”. Also worth visiting is the Town Hall, seat of the Municipality and the University, a name that in ancient times was given to the Town Hall.

Returning you can visit the enchanting city of trulli, Alberobello, an artistic and cultural heritage of global significance, also enhanced and promoted by UNESCO. The first building can be admired in Piazza Plebiscito, the Casa d'Amore, built with mortar and bricks even equipped with a balcony, right in front of the residence of the counts. The destinations to visit in Alberobello are numerous: the streets of Monti and Aia Piccola districts branch out among a multitude of trulli that enhance the splendor of simplicity. The largest trullo is called Trullo Sovrano, built in the second half of the 18th century, the only one with a raised floor. The Sanctuary of SS. Medici built at the end of the 19th century, with the shape of a trullo also the Romanesque-Apulian church of S. Antonio built in 1926.

Rising on a limestone step of the undulating Murgia of South-East, lapped by the breezes of the nearby Adriatic and surrounded by the luxuriance of the countryside, Cisternino enjoys a privileged geographical position and is characterized by its typical whitewashed houses, the alleys dotted with geraniums, arches, small loggias, stone friezes and stairways that enliven its surprising historic center. Continuing south you can visit Ostuni, also known as the "White City", a splendid city dominated by the millennial terminal column of Via Appia and rich in monuments, such as the Aragonese and Svevo castles, the Romanesque church of Christ, the Church of Santa Maria del Casale, the Tancredi fountain and the circular temple of S. Giovanni al Sepolcro. To be visited in particular the museum of the Preclassical Civilizations of the Southern Murge, where you can see the cast of Delia, the prehistoric pregnant woman found in 1991 and dating back to over 25,000 years ago.

The territory of Alta Murgia National Park was born over time thanks to the forces of erosion. The canyon of Gravina in Puglia, which descends towards Matera and Bradano, marks the southwestern border of the protected area. Although the landscape of the park has been modified over the centuries by man, Alta Murgia preserves a fauna and flora of great interest. Also worth visiting are the farms of Alta Murgia, of interest for the wide conformation of the architectural articulations, and Castel del Monte, which crowns the top of Murge.